This paper presents a new type of hybrid ARQ scheme for error control in data communication systems. The new scheme is based on the concept that the parity-check digits for error correction are sent to the receiver only when they are needed. Normally, data blocks with some parity-check bits for error detection are transmitted. When a data block D is detected in errors, the retransmissions are not simply repetitions of D, but alternate repetitions of a parity block P(D) and D. The parity block P(D) is formed based on D and a half-rate invertible code which is capable of correcting r or fewer errors and simultaneously detecting d ( d > r) or fewer errors. When a parity block is received, it is used to recover the originally transmitted data block either by inversion or by decoding operation. The repetitions of the parity block P(D) and the data block D are alternately stored in the receiver buffer for error correction until D is recovered.

Posted by Prof. Shiburaj at 9:24 PM No comments:

Email ThisBlogThis!Share to TwitterShare to FacebookShare to Pinterest
Labels: Presentations

Soap: how to make a mouse work in mid air 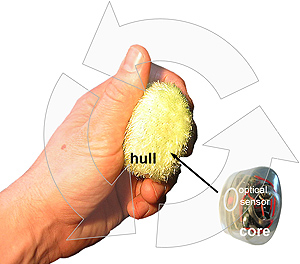 Soap is a pointing device based on hardware found in a mouse, yet works in mid-air. Soap consists of an optical sensor device moving freely inside a hull made of fabric. As the user applies pressure from the outside, the optical sensor moves independent from the hull. The optical sensor perceives this relative motion and reports it as position input. Soap offers many of the benefits of optical mice, such as high-accuracy sensing. Its used for a variety of application scenarios, including wall display interaction, Windows Media Center, slide presentation, and interactive video games.